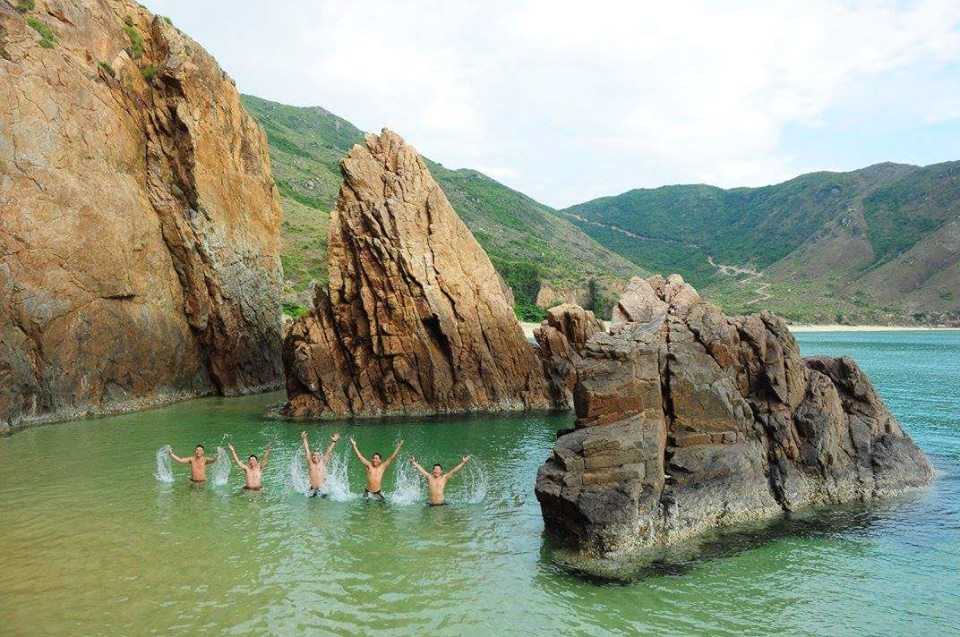 The coarse, rugged fishermen residing around a secluded, fairytale-like beach in the south-central province of Binh Dinh have turned creatively resourceful since they began offering tourism services to both domestic and international holidaymakers a few years ago.

The beach has lured an increasing number of tourists in recent years thanks to its untouched charm and picturesque seascapes, delectable fresh seafood and locals’ sincerity and hospitality.

Surrounded by mountains, cliffs, and lagoons on three sides and facing the East Vietnam Sea on the other, Ky Co pampers tourists with its Eden-like allure, turquoise seawater and silky, golden sand.

The beach, isolated from the fishing villages in Nhon Ly, is accessible to tourists only by renting speedboats or sampans from locals who ride them all the way from Eo Gio Strait to their destination on the half-hour journey.

An under-construction road meandering from Suoi Ca Mountain to the south of Phuong Mai Mountain is just one of the tourism projects in the area that promises easier access to Ky Co.

In late April, as most central provinces were writhing in the broiling heat, Ky Co Beach turned into a tourist magnet thanks to its breezy ambiance and low temperatures, which dropped as low as 27 degrees Celsius in the context of sultry Vietnam, where 30-33 degrees are the norm.

Le Van Be and 17 family members and friends from the Central Highlands province of Gia Lai greatly delighted in their one-day vacation at the gorgeous beach.

The trip cost them each a mere VND210,000 (US$9.4) plus a small sampan hiring fee.
“Never have we enjoyed such delicious seafood and the locals are really kind and honest. They even lent us fishing nets so that we could catch some small fish ourselves,” Be remarked.

Vo Ngoc Hieu, a veteran fisherman in his 50s, shared he has done good business over the past few years since fixing-up his old sampan and buying new gear for tourism activities.

He now carries tourists to Ky Co and serves them food and drinks on a daily basis.

“Most food safety-conscious travelers insist they be served food free of spices or preservatives. We often provide fresh grilled seafood or let them prepare it their own way,” Hieu stressed.

As Tuoi Tre (Youth) newspaper reporters discovered, it was the fishermen in Nhon Ly Commune that woke up Ky Co’s tourism potential three or four years ago.

Hieu revealed that many of his colleagues took out bank loans to buy speedboats and learned how to properly cook seafood at eateries in Quy Nhon City before launching their own ‘package tours.’